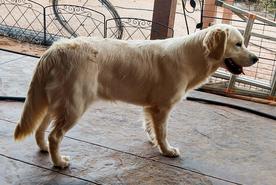 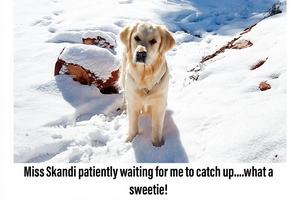 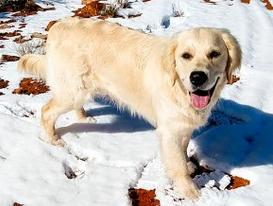 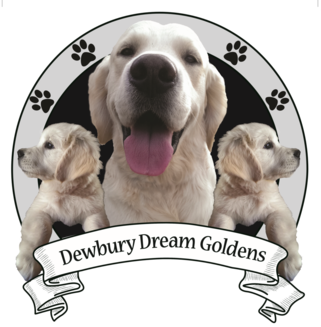 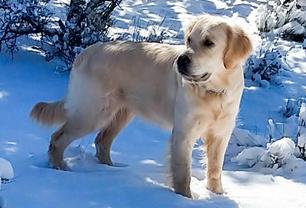 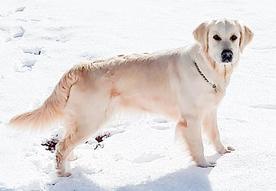 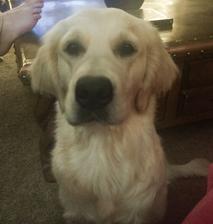 In 2018 we unfortunately had to retire our precious "Angel" from our breeding program, as she came down with the dreaded uterine infection called, Pyrometra. :( We basically raced against time, in the middle of the night, while we drove 5 hours to have South Mountain Pet Care abort her litter & emergency spay "Angel", in order to save her life! :(:(:( But hey,“Angel” at least survived! FYI, this infection is NOT genetic, it's simply just one of those things which can happen to any intact bitch.

"Angel" was an AMAAAAAAZING momma, & blessed us with 17 puppies from 2 litters, one of which we kept....."Skandi."

"Skandi" is now our Shooting star and had all her clearances done, which she passed, (God is good!)

Her full name is Dewbury's Dream of Majik & Ashbury, and you can see her health & pedigree information on: https://www.k9data.com/pedigree.asp?ID=843394

We have a confirmed pregnancy of her first litter, which is due January 9th, 2020. We expect this litter to be SUPER sweet puppies, which might be suited for Service, Companion, & Therapy Dog work.

"Skandi" has Good Hips, Clear Elbows, Heart, & Eyes. And she is Icthyosis Clear, as well as PRA 1+2, & NCL Clear......Basically Perfect Health! :) She also has her CHIC Certificate.

"Skandi" is just as sweet & quiet as her momma & daddy, and is a WONDERFUL girl to live with!! She has inherited many of both "Angel" & "Connor's" personality traits....Mostly the good ones too!!

We took "Miss Skandi" to an International show in Salt Lake City, where she was shown under 5 judges. During that show she ran off with 2 Best of Show, & 3 Reserve Best in Show titles. Needless to say, we were rather happy with her performance!!

"Skandi" has gone to many Therapy Dog visits with "Pappa Connor", and she LOVES IT, however, due to the high cost of certification + lack of handler, I have not gotten her certified yet, but she certainly would pass with flying colors if I did!

"Skandi" is kind to everyone she meets, humans, as well as other animals, and I never have to worry about any aggression issues with her. Her favorite thing to do, besides snuggling, is to swim & hike.

One corky thing about "Skandi" is that when she lays by our feet, she MUST have her paw on top of your foot! Weird huh??

"Ellie" is another Budding Flower of our little family. Her full name is: Southern Dewbury of the Famous Family, and you can see her health & information on: https://www.k9data.com/pedigree.asp?ID=910359

She turned 2 on September 8th, and we took her to the OFA Specialist in Radiographs, Dr. Cohen in Newport Beach, and had her final scores done. Both her Hips & both Elbows were Clear of any dysplasia....Her Hips were Good & both Elbows Normal, for which we are grateful!

We have already have "Ellie's" Heart & Eyes certified, and they both came back Clear of everything.

Ellie is an Icthyosis Carrier, so we will only breed her to a clear stud, as to not carry on that annoying health problem of Icthyosis!!!

She will like any other dog in our program, have her CHIC Certificate as well.

Ellie have been bred to Goose, (Thevenet Black Jack) and this litter will be an AMAAAZING litter with what we expect to be killer good temperaments &  health. We have no doubt that she will bless us with some AMAZING puppies, with GREAT looks & fun personalities.....And maybe even some which could work in the Service, Companion, Therapy, & Hunting field?

God blessed us with 3 females & 2 males in this first litter.

"Ellie" has taken after her Grand parents, and has an EXCEPTIONAL nose.....She LOOOOOVES to find stuff, and if we had 600 hours of training + ?? amount of money, she could certainly be trained into a Search & Rescue Dog. As a matter of fact, her mother comes from none other than the Hungarian kennel, Erdőskerti, which are known for their hunting dog program! However, we do not have that kind of time on our hands, so for now she is just a WONDERFUL pet which we enjoy having around.

She has taken after her Momma, and has a super goofy personality (Dogonality?) and she often times makes us laugh.

Thank goodness, "Ellie" has also taken after her Daddy, and it thus also is a SUPER-SNUGGLER who can snuggle for hours after ends, yet also very playful.....Probably the most playful of our dogs.

She is like a little Canine Model because she is ABSOLUTELY STUNNING with her perfect stop, dark pigment and great conformation. (Had I not broken my foot in 2017 &  again in 2018, I would have shown her, but I'm unfortunately not fully recovered yet.)

"Ellie's" favorite thing is to play "find that ball", which is a game where we hide the ball somewhere, and she sniffs it out. She's quite remarkable at this game!!!

Ellie is also a natural at alerting for Diabetes, which she helps out with on a regular basis with the family she lives with. She is however not certified to do it yet.

I like to say she’s every dog owner’s dream…..She SUPER quiet and ULTRA smart with a lovely conformation & coat. As a matter of fact, she’s so well put together, that she earned her first International & National title when she was only 4 month old, as she got perfect scores from all 5 judges!!! AND she even earned a BOB (Best of Breed) as well! :D

When she was 5 month old, she was shown to 4 more judges who again gave her top scores, which resulted in her achieving getting her National & International Junior Puppy Championships. All the judges complimented me on her structure, coat, pigment, movement & temperament, and one of them told me that it would be a shame to keep this girl from the show rings, and made me promise her to keep showing her!

In the summer of 2015 at the annual Golden Retriever Specialty in the Purina Farm, MO, Angel earned her highest degree yet….She won 2 x RBIS (Reserve Best in Show) in both Judge Sue Brown & Rosemary Easton’s rings!!! WHAT AN HONOR THAT WAS…and for a 20 month old pup???!!!

Angel’s temperament is insanely good! She has never shown any form of aggression towards humans, children or other dogs….even when they bark, attack or hurt her. She just quietly puts up with it, or simply just walks/runs away. No barking, no biting, no chewing. :D

Her pedigree is also VERY impressive. She comes from a long line of Champions and her Mother is imported from the famous “Ashbury Kennel” in France. (That is where her SUPER FEMININE HEAD comes from!) Her ancestors are from respectable European kennels such as; Ashbury, Dewmist, Paudell, Errinderry, & Xanthos, just to mention a few.

Her Grandfather is none other than, “Hector”, Marybel Star Stream Tan, is an International champion with many honorable champion titles, such as BIS, CAC, CACIB, BIG, R.CAC, Excellent.

I could go on and on about her, but will let you check her out & see for yourself how impressive her pedigree indeed is.

“Angel” is out of the respectable kennel, Moonlit Acres which is owned by Dana Logan. I flew to Vancouver, Washington to pick her up and she has truly changed my life. I never knew a puppy could be that perfect!!! If all puppies were as perfect as “Angel”, I would have 20 dogs!!! (Ha! I never would, as I’m VERY opposed to Puppy-Mills!!!)

Everywhere I go with this girl, she attracts attention. Partly because she is such a sweetheart, but certainly also because her coat is simply EXQUISITE!!! It is SO soft that people just MUST touch her.  “Angel” is a VERY quick learner and is also very courageous. She is SUPER easy & outgoing and she LOOOOOOVES children. She loves to hike & swim, and always stays pretty close as to not get lost from me. She loves to play tug-a-war & chase after a ball.

“Angel” is within Breed Standard Size, currently weighing in at 60 lbs. but is not yet fully grown. Her hips are Good, her elbows Normal, her heart is Clear, her eyes are Clear, and she is Ichthyosis carrier & Pra 1 + 2 FREE. She has her CHIC Certificate! :D